The portion of Marie Helen Whiting memorial that you are trying to access requires an extension in order to become active again. Would you like to contribute to the memorial?s extension? 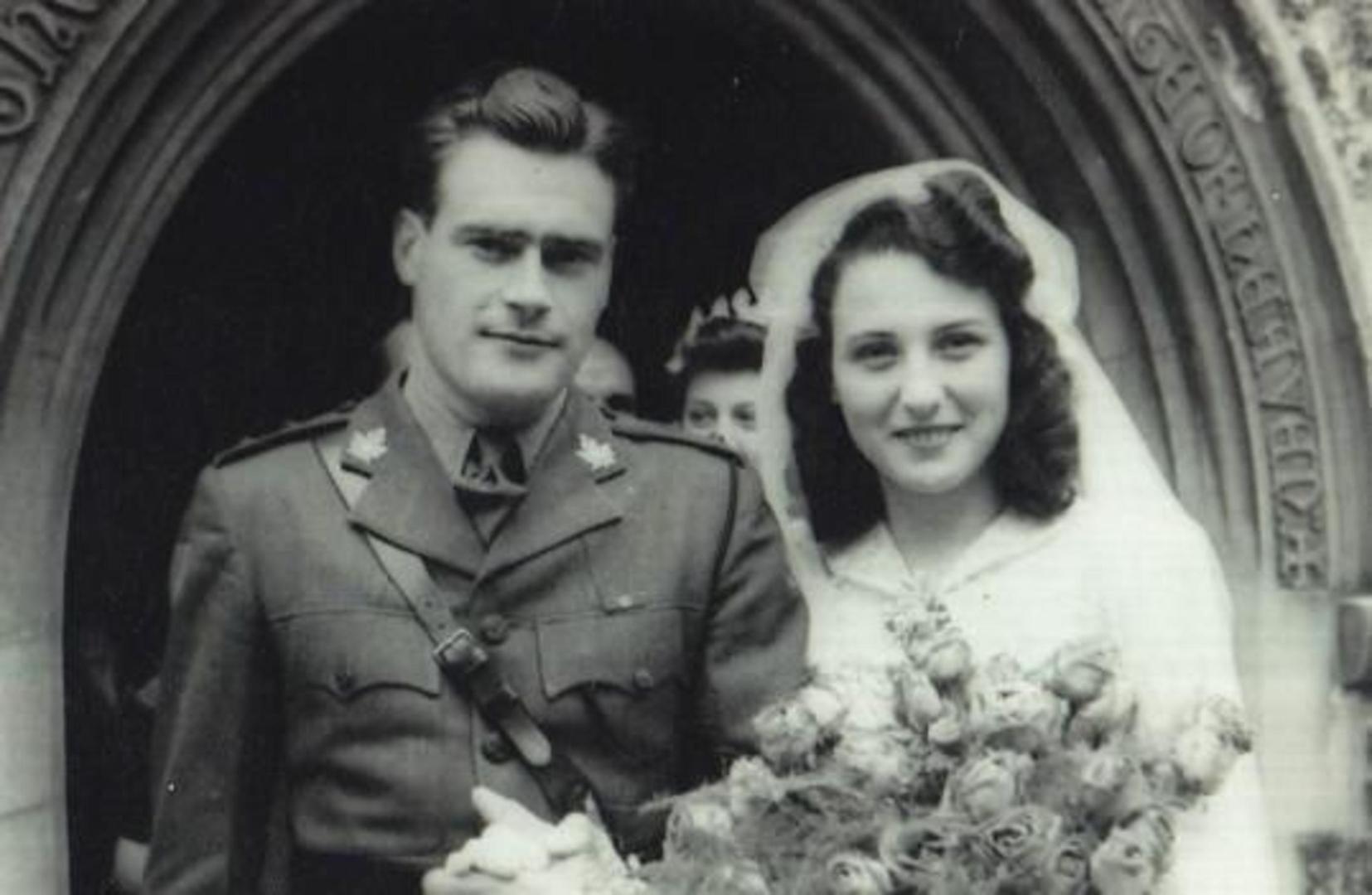 Marie Helen Whiting (nee Whike) was born on the 26 of September 1925 at Amersham, Buckinghamshire, England and was the second of three daughters of Leonard and Mabel Whike. Marie was the last surviving member of her family.

Upon graduation, Marie worked for a short time in the local library and then found employment in the heart of London at a Tea Clearing House.

In May 1944 Marie voluntarily enlisted in the Women's Royal Naval Service, popularly and officially known as the Wrens, which was the women's branch of the United Kingdom's Royal Navy. Marie first served at a Fleet Air Arm Base at Arbroath, Scotland, as an Electrical Technician, and then transferred to the Naval Secret Service and at their Base near Eastcote, Middlesex. Marie was honourably released from the Service in October 1945 but not before winning a cherished medal as the fastest runner in the Wrens.

Marie married Maurice Whiting, her devoted husband of 71 years, on 11 July 1945. The pregnant 19 year old war bride next stepped off the ship in Halifax and boarded the train to a rustic farm in Qu'Appelle, Saskatchewan, where the real unimaginable adventure began. Marie has four children: Gary, Pamela, Marshall and Mark, nine grandchildren and fifteen great grandchildren.

In life, Marie was at her animated best in warm and happy family gatherings, playing croquet, dancing or hosting the multitude at a generous delectable table of first class cooking and pastries. Although she loved her England deeply and was a patriot beyond measure, and loved her family intensely and was loyal, loving and devoted to us all, Marie was head over heels with her adoring long haired miniature dachshund called Harry. This little dog was everything and his dedicated overwhelming love for her touched her soul and warmed her heart.

During her days in Ottawa, Marie was a volunteer at Riverside Hospital and worked at the famous five star Chateau Laurier for six months orchestrating a managerial survey. Vacation time was spent at their winter condo in Florida for twenty years avidly playing cards, a taxing game of tennis, shuffleboard championships with dear friends or enjoying the bucolic pleasure of Cocoa Beach and the glorious sea.
After a long and arduous medical battle, our dear mother and grandmother passed away quietly on 28 March 2019. Her many strengths and infectious good humour will be missed by us all.
My dear Mum will always be safe in our hearts.

MY DEAR MOTHER HAD MANY STRENGTHS: EXCEPTIONALLY WARM HUMOUR, A
DEEP ADORATION FOR DOGS AND HER DELECTABLE BAKING TO NAME A FEW. BUT
MUM'S MOST PROFOUND STRENGTH, ONE THAT WAS EVER DEPENDABLE AND
WITHOUT QUALIFICATION WAS THE PROFOUND AND UNSHAKEABLE LOVE SHE
HAD FOR HER FAMILY. MUM WAS ABSOLUTELY COURAGEOUS WHENEVER ANY
ONE OF HER CHILDREN WERE THREATENED AND WAS ALWAYS THRILLED BEYOND
MEASURE WITH OUR PERSONAL ACCOMPLISHMENTS. THIS SENSITIVE AND
GENTLE WOMAN LOVED AND WAS DEVOTED TO US TO THE DEPTHS OF HER SOUL:
WE WERE HER ENTIRE WORLD.

MUM WAS A BEAUTIFUL WOMAN, A GENUINE BEAUTY WITH A RADIANT,
ENCOURAGING SMILE, LOVELY SKIN, PORCELAIN COMPLEXION AND A VIVACIOUS,
MAGNETIC, SPIRITED, FULL OF LIFE PERSONALITY, WHO DID NOT KNOW HOW TO
MAXIMIZE THIS SPECIAL GIFT TO ADVANTAGE. MUM WAS AT HER VERY BEST
HOSTING A TABLE FULL OF ANIMATED FAMILY AND HUNGRY GRANDCHILDREN
FOLLOWED BY DANCING GAILY IN THE BASEMENT TO LOUD MUSIC, WHITE WINE
AND BARKING DOGS AND THROUGHOUT THIS HARMONIOUS ATMOSPHERE MUM
WAS CLEARLY DOMINATED BY A FEELING OF IRREPRESSIBLE PRIDE FOR HER
ADORING AND MOST CHARMING COMPANY.

MUM STARTED HER NEW MARRIED LIFE IN CANADA TOTALLY AND SHOCKINGLY
UNPREPARED DUE TO HER OVERLY PROTECTED YOUNG LIFE IN ENGLAND, A
MODEST EDUCATION AND A POLLYANNA INGENUE NAIVETE THAT MADE HER
ALMOST HELPLESS.

MUM DID NOT KNOW HOW TO CULTURALLY ASSIMILATE IN THIS LAND AND,
CONSEQUENTLY, WAS DETERMINED TO REMAIN THE CLASSIC STEREOTYPED
PEACHES AND CREAM ENGLISH GIRL. IT WAS WHAT SHE KNEW BEST AND MUM
BLINDLY BELIEVED IN HER FATHER'S UPBRINGING AND HIS QUESTIONNABLE
VALUES. THIS QUESTIONABLE MENTALITY FREQUENTLY CAUSED, SHALL WE SAY,
CERTAIN DIFFICULTIES IN DEALING WITH OUR DEAR MOTHER, AS WE ALL HAVE
EXPERIENCED WITH HER AT ONE TIME OR ANOTHER.

MUM WAS A FREQUENT READER, AN ACCOMPLISHED KNITTER AND A PRISTINE
EXAMPLE OF SARTORIAL SPLENDOR, EXCELLENT GROOMING AND GOOD TASTE.
SHE KNEW THIS OF COURSE. ON THE OTHER HAND, MUM WAS A SO-SO BOWLER, A
FREQUENTLY DISAPPOINTED CARD PLAYER AND ABSOLUTELY UNABLE TO DEFEAT
MY FATHER SOUNDLY THROUGHOUT THEIR MANY CRIBBAGE CHAMPIONSHIPS. A COUP WHICH DAD CHERISHED I MIGHT ADD.

MUM DREAMED THE HOLLYWOOD DREAM, THE UNREALISTIC, ARTIFICIAL,
SHALLOW AND UNATTAINABLE HOLLYWOOD DREAM. SHE ADORED ELIZABETH
TAYLOR AND THE OTHER PERIOD ACTRESSES LIKE HER AND EVERTHING THEY
REPRESENTED - ESPECIALLY THE GLITTERING GLAMOUR, THE ENVIED BEAUTY,
THEIR SEEMING POWER OVER MEN, THE SEEMING ILLUSION OF HEAVEN ON EARTH
WITHOUT ANY DAY TO DAY PROBLEMS AND THE HAPPY SUCCESSFUL BUZZ OF
THEIR MAGICAL LEGENDARY FAME.

THEN, QUITE SUDDENLY, MUM WAS OLD AND ONCE AGAIN UNPREPARED; THIS
TIME FOR THE DEMANDING ARDUOUS TRIALS OF AGING. UNPREPARED FOR THE
PERSISTENT, RUTHLESS AND GRIM FORFEITURE OF YOUTH AND THE LOSS OF HER
TREASURED BEAUTY. SHE DID HER BEST TO COPE BUT THE CHALLENGE BECAME
TOO MUCH WHEN THE UNFORGIVING ALZHEIMER DISEASE ENTERED HER BRAIN.
MUM'S DETERMINED ENGLISH TRAFALGARIAN SPIRIT FOUGHT TO STAY ALIVE WITH
DIGNITY BUT THE COST WAS TOO MUCH. HER BODY, SOUL AND MIND BECAME
RAVAGED BEYOND SAVING AND SHE CRIED TEARS OF DESPAIR IN SILENCE.

MUM'S SOUL FINALLY BECAME FREE OF LIFE'S CRUEL BURDEN WHEN SHE GENTLY
PASSED AWAY IN THE EARLY MORNING OF WEDNESDAY, 28 MARCH. SHE WOULD
HAVE DEARLY APPRECIATED WITH A HAPPY AND THANKFUL GLOW THAT YOU
WERE HONOURING HER CHERISHED MEMORY HERE TODAY. I TRULY BELIEVE THAT
MUM KNEW THAT SHE WOULD ALWAYS BE SAFE IN OUR HEARTS.

My dear Mom is finally at rest with our precious Dad. Rest in peace Mom.

Thinking of all of you in your time of loss. Take comfort in all of the wonderful memories of your mom and your family.

Farewell my parents and happy to call friends, thank you for all the love and devotion throughout your years,
You are missed on earth, but right here in my heart. 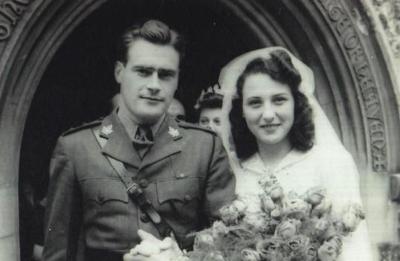